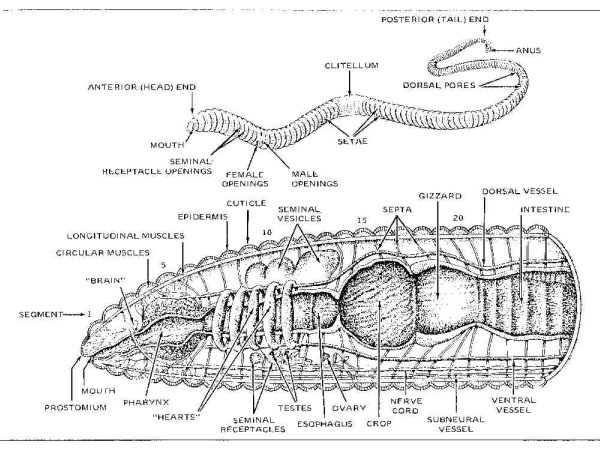 Worm biology is just as important to understand, if you are going into worm farming, as it is to understand the biology of any other animal that you may keep or raise. Good animal husbandry is based on knowing your animal.

Well, worms are animals too, just on a a very small scale. Knowing the different systems of an animal and how those systems work helps in:

All annelids (segmented worms) have one of the more highly developed nervous, closed-loop circulatory, digestive, excretory, muscular and reproductive systems of any animal within its group.


The segmented or ringed feature of the earthworm aids in distinguishing different annelid worms. The larger Lumbricus terrestris or nightcrawler, has 150 segments while the manure worm or red worm only has 95.


Segmentation is an important aspect of worm biology as it aids the earthworm in moving.


Each segment or section has muscles and bristles called setae. The bristles help anchor and control the worm when moving through soil. The bristles hold a section of the worm firmly into the ground while the other part of the body protrudes forward.


The independent lengthening and contracting of each segment causes the body to lengthen in one area or contract in other areas. Without this independent action, the worm would be stationary.

Using the segment partitions on the diagram, let's see what makes up our compost friend.

Mouth. There is an overlapping appendage called the prostomium which acts as a wedge to push through soil or debris and to push material into the mouth.


Though the earthworm has no eyes, it does possess special tissue located at the earthworm’s head that is sensitive to light. These tissues enable an earthworm to detect light and not surface during the daytime.


This aspect of worm biology works in the worm composter's favor in two ways:


1)when harvesting worms, the worm compost is mounded which forces the worms have to go down into the pile; the compost is removed a little at a time; each time the worms go deeper; after taking away all the compost, the only thing that's left is worms.


2)high humidity or high temperatures can affect worms by making them leave the bin (whether all or just a few); keeping the lid open forces the worms to go down into the bedding.

"Brain". The earthworm's brain is made up of paired ganglia (group of nerve cells) connected to a nerve cord. An impulse, such as touch, light, or moisture, is detected by skin cells.


A pair of nerves in each of the earthworm's segments carries the signal to the brain and smaller ganglia in each segment, where the signals are analyzed.

The central nervous system then transmits impulses on nerves that coordinate muscle action, reaction to light, touch or moisture sensation.


Pharynx. Food enters the earthworm’s mouth where it is swallowed by the pharynx.

Circulation. In worm biology, there is not one heart, but five pairs of aortic arches, which function like a human heart. They are responsible for pumping blood into the dorsal and ventral blood vessels.

Esophagus. The food passes through the esophagus, which has glands that release calcium carbonate to rid the earthworm’s body of excess calcium.

Crop & Gizzard. Worm biology does not include a stomach. Rather,like birds, food moves into the crop where it is stored and then eventually moves into the gizzard where stones that the earthworm ingests grind the food completely.

Intestines. The intestine releases fluids to aid in the digestive process along with many types of microorganisms. The intestinal wall contains blood vessels where the digested food is absorbed and transported to the rest of the body.


Anything not converted into energy is released out the tail as waste, known as "worm castings".


Respiration: In worm biology, there are no lungs, but a thin layer of moist cells through which oxygen diffuses in and carbon dioxide diffuses out. These molecules must be wet so that they can enter and exit the plasma membrane, thus the worm's requirement for a moist environment.


Reproduction: Adult (sexually mature) earthworms have a distinct swelling called a clitellum. It produces most of the material secreted to form earthworm egg sacs or cocoons.


Earthworms are hermaphrodites (both male and female sex organ), but most need a mate to reproduce. They will line up together head to tail and transfer sperm to each other.


The clitellum forms a ring around the worm. As the worm backs out of the ring eggs and sperms are injected into the cocoon. The ring of the cocoon is released through the anterior portion of the earthworm.


Once released and deposited into soil or worm compost, the ends of the cocoon are sealed and the embryos are developed in this incubator-like structure.